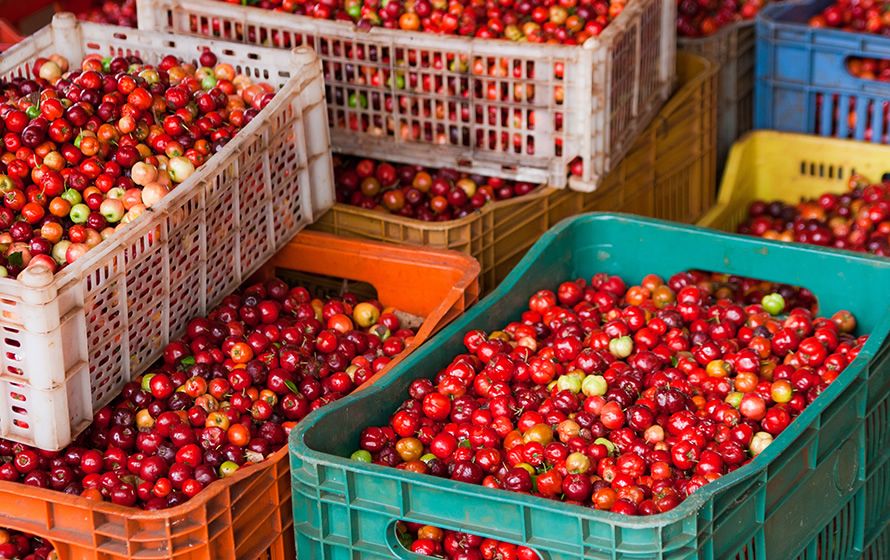 Our Acerola producer is a small and innovative family business which is certified Organic who out of love for nature moved from Sao Paolo to be near to the small Acerola and Acai plants to concentrate on their production and subsequent processing. In this way the freshly harvested fruits can be transported quickly to the production facilities and be processed as quickly as possible in order to fulfill the highest quality standards.

"Plants" is a little exaggerated, they are more like huge gardens in which Acerola shrubs among other things grow, from which a whole family feeds itself. All the family members and neighbours help with the picking in the harvesting time which is between October and April/May.

I also collected Acerola cherries for two days in a cloth shoulder bag and subsequently filled them in boxes, which were collected on the same day by Mr Moacir, the Manager of the production company and were processed straight away.

Unlike for use in conventional Acerola powder, only the unripe green fruits are used for the production of ORGANIC Acerola powder, whose vitamin C content is the highest. The colour of the end product, in this case the fruit powder extract, is thus light beige/brown.

The freshly delivered Acerola cherries are immediately washed in big containers with cold water. Afterwards they go into quarantine, which they only leave once they have successfully passed a laboratory control.

The chosen fruits are then put into a special basin and formed into a viscous mass. Subsequently with the addition of the carrier Organic Maltodextrin, the powder extract is created in ultra modern spray drying systems. The finished product trickles directly out of the spray towers into bags which hold 25kg.

At the end a final laboratory control is done on the end product and a specimen sample stored before the ORGANIC Acerola powder is stacked on pallets ready to be transported.

All our suppliers are small, engaged family businesses whose prime concern is to maintain the rainforest which is their livelihood and not to exploit it.

The fruits whether Acerola, Guarana or Acai are part of their lives, they grew up with them and value them in a very special way.

The acerola cherries are harvested by hand between October and April / May.

After harvesting, the acerola fruits are immediately processed into puree, pasteurised and frozen at temperatures between -25°C and -35°C. The result is a rapid freezing of the puree. At these low temperatures, the puree freezes quickly, avoiding the formation of large ice crystals. The de-icing of the fruit takes place in special drying chambers in which the water passes directly from the solid to the gaseous state under vacuum.

This freeze-drying process is called sublimation and takes place at low temperatures of -12°C to a maximum of -25°C degrees until the humidity is less than 5%.

Since no carrier is used in the freeze-drying process, but only acerola cherries from which water is extracted, it is referred to as acerola powder instead of an extract.

On average, the ratio between acerola raw material and powder is 17:1, i.e. 1 kg of powder is produced from 17 kg of raw material.

The lower water content than in fresh fruit increases the concentration of all other ingredients. As a result, freeze-dried fruits contain a large amount of antioxidants and provide the body with vitamins and minerals.

We obtain our Acerola from the Amazon region of Ceará in Brazil.

We buy our raw products direct from the producers, pay fair prices and support the farmers.

Please contact us if you have any questions,
your AMAZONAS Team.

Quality has priority! High quality, unique and useful natural products – this we are very proud of. We develop special recipes tailored to the respective properties of the product with experts in order to maintain our health and fitness in a completely natural way. We sell natural products which indigenous people have already used.