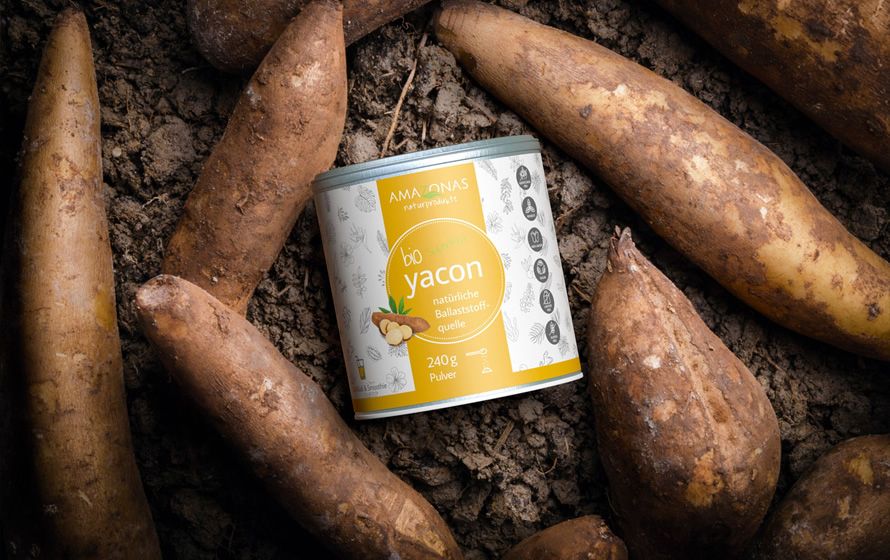 The power tuber from the Andes

Yacon is a brown to violet tuber from the Andes which can grow to a weight of up to 1 kg.

From the outside it looks like a radish or sweet potato. It has been regarded as a useful staple food for decades by the natives. The tender tuber flesh is eaten as a vegetable, salad or simple raw. The yacon tuber is similar in taste to a refreshing sweet honey melon or pear.

Yacon is not regarded as a vegetable but - because of its high levels of sugar – as a fruit. The yacon tuber is also regarded as the "diabetic's potato" due to its blood sugar sinking effects.

What does "yacon" mean?

The name "yacon" comes from the South American Quechua language and is composed of the words "yakku" (tasteless) and "unu" (water, as the tuber contains a lot of water).

Our yacon thrives in the harsh climate of the Peruvian Andes, among other places. It is very adaptable and is now also cultivated in warmer regions. Meanwhile, it has even been successfully cultivated in Germany. The yacon root, which contains a lot of water, has always been a valuable staple food and remedy for the local people. It is cultivated according to organic guidelines. The root is ripe when the outer skin becomes wrinkled. Only the best roots are selected by hand to produce the valuable yacon powder.

Yacon as a medicinal plant

The root, which weighs up to 5 kg, has many healing and beneficial properties. It has been used by the locals for centuries, e.g. for liver diseases, digestive problems, but also as an anti-ageing remedy.

Due to the high content of inulin and oligofructose, yacon is a high-quality prebiotic: the indigestible dietary fibres enter the intestine and serve as food for the "good" bacteria. This ensures a healthy intestinal flora. Result: a healthy intestine that feels good and is more resistant to intestinal cancer.

Yacon is also called the "diabetic potato" because the fructooligosaccharides it contains curb glucose production in the liver and thus reduce fasting glucose. Thus, yacon is the ideal sugar substitute for diabetics. It aids weight loss by increasing the feeling of satiety.

Studies have shown that yacon also has an antioxidant effect: many chronic diseases are caused by free radicals attacking the DNA. Yacon protects the DNA from oxidative stress.

Is yacon suitable as a sugar substitute? Comparison with stevia

Yacon is suitable as a sugar substitute. Reasons: Yacon has a high content of inulin and oligofructose, which belong to the so-called "fructooligo-saccharides", natural sugar substitutes. Their sweetening power has hardly any calories and is 30-50 times higher than that of conventional sugar. The high fibre content of inulin and oligofructose ensures a quick feeling of satiety and is therefore an ideal companion for weight reduction and diabetes.

Botanically, yacon belongs to the daisy family and is therefore related to stevia, among others. However, stevia products are rather bitter in taste and remind of sweetener, while yacon has a pleasant, sweet taste and, unlike stevia, is a high-quality prebiotic.

Is Yacon related to the sweet potato or Jerusalem artichoke?

Botanically, yacon, like Jerusalem artichoke, belongs to the composite family. Yacon is not related to the sweet potato, which belongs to the bindweed family.

Yacon is botanically related to the following plant genera:

Are there different varieties / colours of yacon?

Why is yacon also called a (subterranean growing) fruit?

The taste of the yacon tuber is reminiscent of a sweet honeydew melon or pear, i.e. fruit. Since the tuber grows underground, it is also called "fruit growing underground".

What is a prebiotic food?

Foods are called prebiotic if they contain special indigestible dietary fibres. Important prebiotics are, for example, inulin and oligofructose. They enter the lower intestine with the food, where they serve as food for the desired, i.e. "good" bacteria – the probiotics – and thus ensure a healthy intestinal flora.

Yacon use in diet

Yacon is ideally suited as a product to accompany a diet, because it provides an increased feeling of satiety. The inulin it contains contains hardly any calories and has a satiating effect, thus serving as a natural appetite suppressant. In addition, dietary fibres slow down the digestion process, which means that the blood sugar level does not rise as steeply and drops more slowly, which prevents cravings.

Yacon tea made from fresh or dried leaves is traditionally drunk in South America for diabetes, due to its blood sugar and cholesterol-lowering effect. Unfortunately, yacon tea tastes extremely bitter, which puts most consumers off and makes them switch to yacon powder.

It is known from studies that inulin can minimise the risk of colon cancer as well as tumour formation. Source: https://www.zentrum-der-gesundheit.de/artikel/praebiotika/inulin-praebiotikum

Use of yacon for diabetes or fatty liver

Yacon has a low calorie content and causes early satiety due to its high fibre content. Therefore it is suitable for diabetes or weight loss diets.

Yacon can protect the liver from fat storages, regulate blood fat levels and lead to healthy liver values, so you can also use yacon to reduce a fatty liver.

Significance of the glycaemic index, blood sugar level on Yacon

Although FOS (Fructo-Oligosaccharids) belong to the carbohydrates, they are indigestible, so they do not enter the blood like sugar and therefore do not increase the blood sugar level. This is also the reason why yacon is said to have a glycaemic index (GI) of an incredible 1. Yacon is said to prevent or protect against diabetes.

The yacon tuber came to Europe from South America in the 16th century, but was never able to establish itself as a popular fruit.

Outside the Andean countries, only a few yacon plantations are known, for example in Japan, New Zealand, Brazil and China since the 1960s. In Europe, the first cultivation trials took place in Italy in the 1920s. In the EU today, yacon plants are mainly cultivated in the Czech Republic. In Germany, there are a few yacon growers in Lower Saxony, Baden-Württemberg, Brandenburg and also in the Southern Palatinate. They offer their products in regional trade and via mail order.

Areas of use of yacon powder

In industrialised countries, yacon is now rated as a "superfood". The powder is suitable for the following applications:

Why are there no Yacon chips from AMAZONAS for end consumers?

Due to the low demand. In addition, most customers prefer the yacon powder, as the price-performance ratio is right here.

Yacon and side effects

Often larger amounts, such as those required for cakes, lead to flatulence, especially if one is not used to prebiotics. Toxic side effects are not reported in the literature.

Use approx. 1 tbsp. (approx. 12 g) yacon powder to sweeten yoghurt, muesli or smoothies as required. Yacon powder is very sensitive to oxygen, i.e. always carefully close the can after use!

We obtain our yacon from the Andes in Peru.

Quality has priority! High quality, unique and useful natural products – this we are very proud of. We develop special recipes tailored to the respective properties of the product with experts in order to maintain our health and fitness in a completely natural way. We sell natural products which indigenous people have already thought to have healing properties.