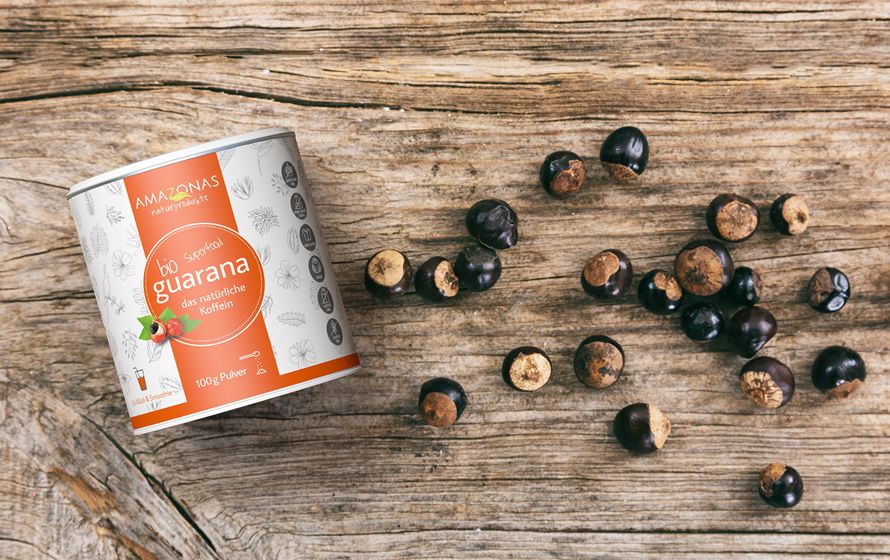 The natural caffeine for mental and physical challenges

Guarana (paullinia cupana), is a climbing plant from the soapberry family, native to the tropical rainforest. The natives discovered this climbing plant with its red fruit and dark seeds long before the first European settlers set foot in the Amazon. They called it „warana“ which later became Guarana. Even today the seeds are pressed into the shape of a stick by the Indians, which they pulverise using the raw tongue of the Pirarucu fish and use as a pick-me-up and food substitute.

Unlike coffee, Guarana does not make one nervous but has a pleasant effect regenerating and refreshing body and soul. Its active ingredient caffeine (also called Guaranin) is only released slowly and therefore is kinder on the body due to the high proportion of tanins and raw fibres. The stimulating effect thus lasts 4 to 6 hours without causing any side effects.

Wrongly it is often said that Guranin has a totally different effect than that of caffeine. Guaranin is however an „old“ or different way of saying caffeine.

Often the high caffeine content is criticized, which for every 100g Guarana powder is 3,5 percent. It is overlooked however that not 100g but only 1g powder per portion is used. There is only 40mg caffeine in this small but adequate amount whereas a cup of coffee contains 80mg caffeine.

Guarana is ideal for all those who cannot tolerate coffee but who do not want to miss out on the stimulating effect of coffee. It is suitable for people who are under a lot of stress and for those who want to increase their output in a natural way. It is also particularly great for night owls and long distance lorry drivers who do not want to consume so much caffeine but need to keep alert for hours. In Brazil Guarana is part of daily life and is very widely used by footballers, racing drivers and politicians.

We obtain our guarana from Brazil, the states of Pará and Amazonas.

The scientific name of the guarana plant is Paullinia cupana or Paullinia sorbilis. The first guarana bushes were discovered in Bahia and later in the Amazon region. Guarana was already appreciated by the Indian tribes of the Amazon region as their companion on strenuous journeys. They once called the darker seeds "warana", which later became "guarana". The seeds were pressed into a stick and grated on the rough tongue of the pirarucu fish to make powder, which served them as a tonic and food substitute. Today, 70 % of the processed guarana is used in the beverage industry (energy drinks). The remaining 30 % is used specifically in food supplements or in the pharmaceutical and cosmetics industries. 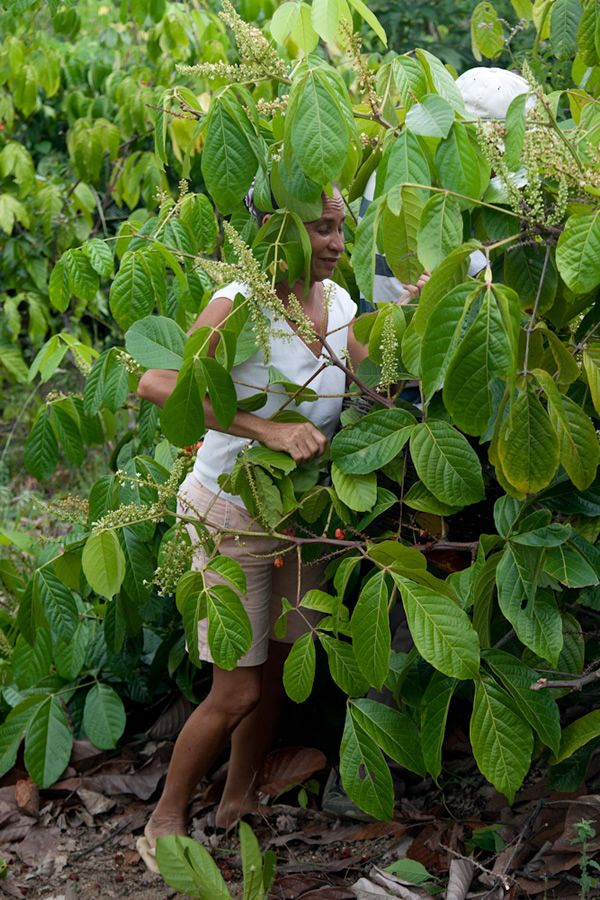 Why is the tree also called a soap tree?

The guarana plant belongs to the soap tree family, although it is not actually a tree. Guarana belongs to the lianas and is more like a shrub, but it can grow up to fifteen metres high. This is really very confusing, so here is a photo of the guarana bush. 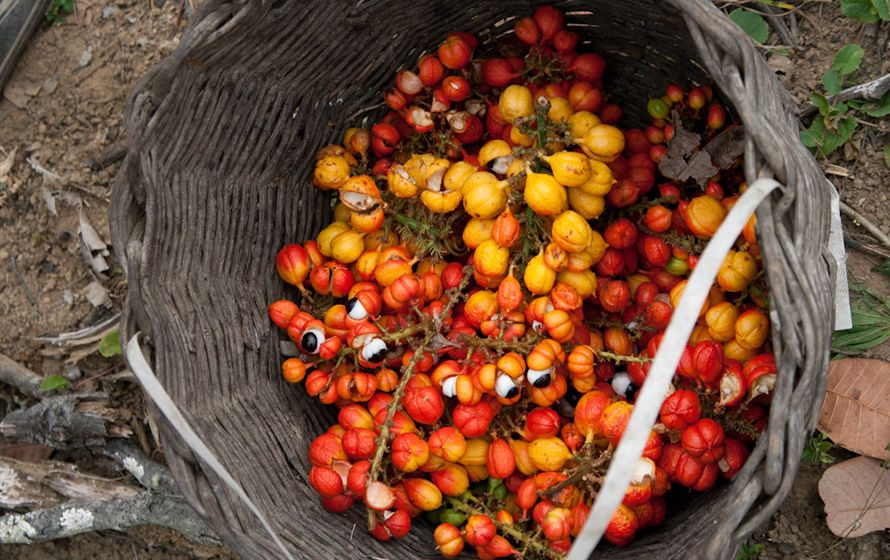 Caffeine not only makes us awake and alert, but is also said to protect us from cancer and Alzheimer's disease. With these properties, it has truly earned its place among the healthiest foods in the world.

What are guarana seeds?

Guarana seeds are just another name for guarana seeds, the part of the guarana plant that is used for consumption. The guarana seeds grow up wrapped in a red plant cover, only when the cover bursts open are the seeds ripe and are ploughed.

What does natural caffeine in guarana mean?

Amazonas "Guarana powder pure" consists of ground guarana seeds that contain naturally occurring caffeine from the guarana plant. This natural caffeine is bound to polyphenols (secondary plant substances) and tannins, which only release the alkaloid in the intestine, so that the stimulating effect starts later, but lasts longer than the caffeine of the coffee bean and is gentle on the stomach. The situation is different with caffeine extract, which is obtained by extraction from tea leaves or coffee beans, for example with a Soxhlet attachment. This caffeine, which is no longer bound to natural plant substances but has been isolated, is called synthetic caffeine. It is produced in large quantities during the industrial decaffeination of coffee, whereby either dichloromethane, ethyl acetate or supercritical carbon dioxide is used as the extraction agent, so that it is no longer 100% pure, natural caffeine.

Caffeine from coffee is bound to a chlorogenic acid-potassium complex, which immediately releases caffeine after roasting and contact with stomach acid and thus has a quick and very brief stimulating effect. Caffeine from guarana seeds is bound to polyphenols (secondary plant substances) and tannins, which only release the alkaloid in the intestine, so the stimulating effect starts later, but has a longer and gentler effect and does not release stomach acid. The effect lasts for about 5-9 hours. Even people who are sensitive to coffee usually tolerate the caffeine in guarana seeds very well.

How long does it take to show an effect?

The caffeine of the guarana plant takes effect after about 45 minutes, which is how long it takes for the caffeine to be absorbed into the bloodstream via the gastrointestinal tract. From there, the guarana caffeine affects the central nervous system and the muscles and lasts between 5 to 9 hours until the caffeine is completely broken down.

Take guarana on an empty stomach?

Guarana, like coffee, can be taken on an empty stomach without any problems, whether dissolved in a drink, as a chocolate bar or in tablet form. 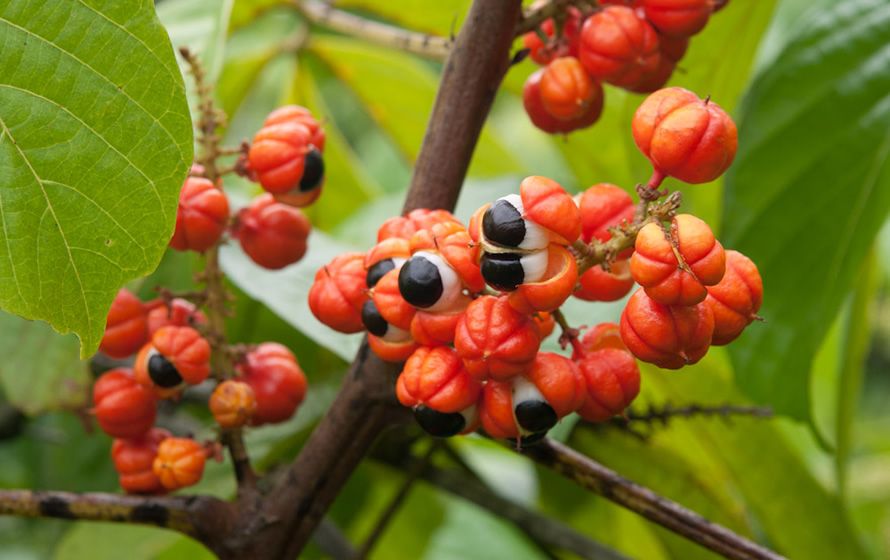 The caffeine in guarana seeds is similar to that found in mate or matcha, but guarana contains a higher concentration of caffeine.

Is guarana suitable for children?

In Brazil, schoolchildren take guarana powder before class, as a bar or stirred into a drink, to improve concentration. In small quantities, about 1 g, which corresponds to about 30 mg of caffeine, it can also be consumed by children without any problems.

How long does the effect of guarana last?

The stimulating and pleasant effect lasts between 5 to 9 hours.

Dosage, overdose. Are there unhealthy side effects?

Guarana is known for its stomach-friendly effect. In contrast to coffee, people who have stomach problems tolerate guarana very well. It also has a mild antipyretic effect and is known for its invigorating effect. But it is precisely this invigorating effect that can develop into a side effect if too much guarana is consumed. As a result, the following symptoms can occur: Trembling, inner restlessness, headaches, palpitations, diarrhoea. In principle, the symptoms mentioned are not possible side effects, but symptoms that are due to an overdose. 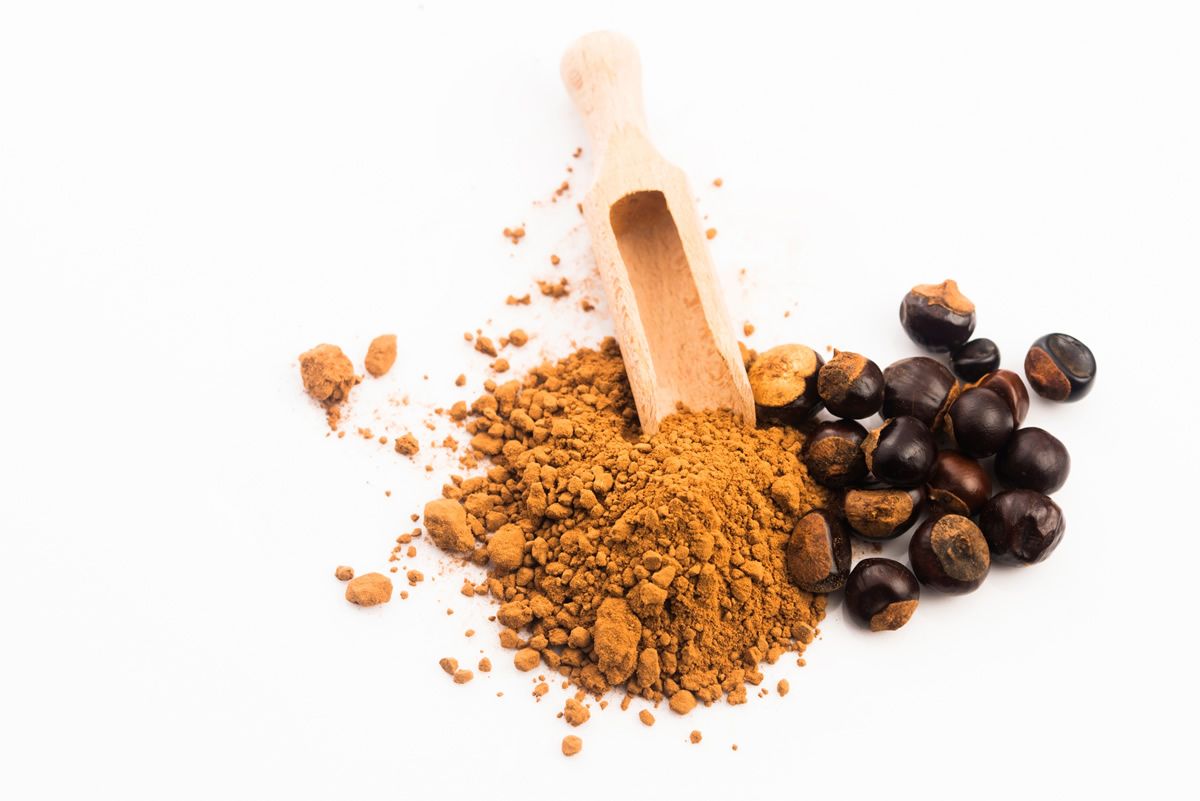 Is guarana more effective as a powder?

Guarana is mainly offered in powder form, which can be consumed pure or processed in power bars, tablets, capsules or in combination with other superfoods. In liquid form, it is usually added to drinks, but this is guarana concentrate made with alcohol. It has a more intensive but less gentle effect and, as isolated caffeine, no longer has the long-lasting effect of natural caffeine.

Shelf life and storage of the guarana powder

Guarana powder usually has a 3-year shelf life. However, you should make sure that it remains dry and that not too much moisture penetrates into the tin.

Does the effect of guarana improve in combination with maca?

A great combination, because in addition to guarana, maca also increases concentration, making the effect even more intense in the double pack.

Is there also guarana tea, what is its ingredient?

There is no guarana tea in the classical sense. Some suppliers recommend dissolving guarana powder in boiling water and confusingly call this drink "guarana tea".

Are there any allergies to guarana?

There are no known allergies.

The caffeine in ground guarana seeds (approx. 3.5%) is bound to polyphenols (secondary plant compounds) and tannins, which release the alkaloid only in the intestine. The effect lasts approx. 5-9 hours.

This is made by extraction, isolating the caffeine from the guarana seeds (using dichloromethane, ethyl acetate or supercritical carbon dioxide as extracting agents). and increasing the caffeine concentration, sometimes to 10% caffeine, by using about 10 kg of guarana seeds in combination with coffee beans to produce one kilo of powder extract. This highly concentrated caffeine is no longer bound to natural plant substances, has more of a stimulating effect and attracts stomach acid. Due to the high and isolated amount of caffeine, the guarana powder extract has a more intense effect than a gurana powder, but it is no longer a "natural" guarana powder with the benefits of a natural product that is not spiced up with additives and deprived of its natural environment.

Important information about our natural products from Asia

More and more products from Asia and India are being offered on the European Markets as so called high quality organic. Sadly however, what the documents and analyses states does not always conform to the values determined by the laboratories which also carry counter-analyses. There have already been product recalls due to excessive levels of heavy metals or pesticides. In another case, the alleged organic goods had to be re-declared as conventional due to excessive pollution.

This applies to us

Demanding customers must be able to rely on compliance with quality standards. Quality comes at a price.

We look forward to a good and trusting cooperation, your AMAZONAS Team.

Quality has priority! High quality, unique and useful natural products – this we are very proud of. We develop special recipes tailored to the respective properties of the product with experts in order to maintain our health and fitness in a completely natural way. We sell natural products which indigenous people have already used.